In the worlds before this Friday… Primal chaos reigned. Heaven sought order.
But the Phoenix can fly only when its feathers are grown.
The four worlds formed again and yet again,
As endless aeons wheeled and passed… Hang on… enough Monkey business.

All is well fonksters because The Offtopics are playing again this Friday at your favourite craft beer and sandwich haunt on Gertrude Street.

That’s right – we’ll brook no timewasting!  There’s so much to do.  There are two whole sets of funky songs to get through before the night is over.  It’ll also be our last gig before we start doing some extended studio time prepping for our first ever album.  We’re really excited about this as *cue drum roll* we’ll be working with Nick Herrera who has previously recorded bands such as Hiatus Kaiyote and some other bands who you’ve probably never heard of.

Anyway – it’ll definitely be worth joining the conga line at the gig this Friday as we’ll be kicking out all sorts of jams.

There’s also a facebook event if that sort of thing floats your floating thing. 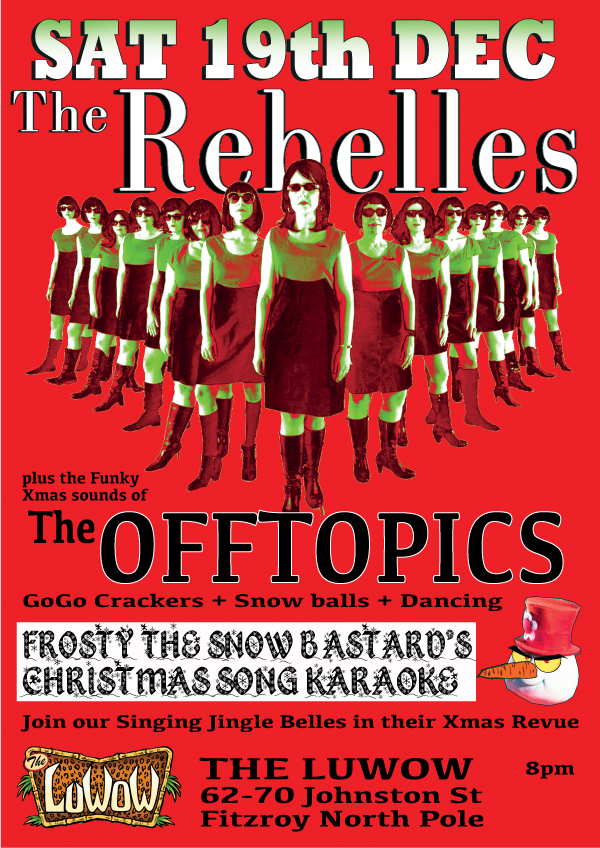 If this is the Silly Season then you need Melbourne’s silliest band of bravos to usher it in.

Saturday 19th December sees The Offtopics team up with those mighty maidens of shimmy – The Rebelles – to wail on the whole Christmas thang.  There’ll be cocktails, dancing and Frosty the Snow Bastard’s Hissy Chrissy Karaoke all at Fitzroy’s finest Tiki Bar/cave of the Lava Goddess The LuWow.

Don’t know much about The Rebelles and their shimmy shammy whammy?  Check them out here: http://rebelles.com.au/

The Offtopics and Red Eagle at Yah Yah’s

Those clown princes of fonk, The Offtopics, are co-headlining an epic night of sizzling soul and swampy blues at Yah Yah’s on Saturday 19th September.  The night starts at 8pm with a trio of soul from That Gold Street Sound and Funk Rabbit with The Offtopics at 9pm in a trend-bucking early headliner.  Red Eagle are launching their forthcoming vinyl extravaganza that evening so after a solid dose of funkiness get ready for some deep water Warnambool blues.  They’ll be supported by Crossfire Hurricane.

This line-up is all killer and no filler so think about getting in when the doors open at 7pm.  There are good odds that this show is going to sell out!

For more info and updates check out:

or get in touch at management@theofftopics.com

Check it out! You could have this poster for your very own. The Offtopics at The Catfish 8 Aug

Why not download it, print it off and bring it to the gig?  Then use it to wrap your Philly Cheese Steak.  The Offtopics support the applied arts…

Saturday 8th August will see The Offtopics tickling The Catfish’s whiskers. The band’s sultry northern horns, slinky guitar and ever so cuddly grooves will be the perfect compliment to The Catfish’s craft approach to high-end carbs on tap.

The Offtopics play from 9pm. Entry is free. Contact management@theofftopics.com for more information.